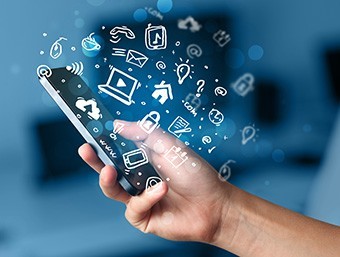 What is the difference between hybrid, native and Web apps?

In the context of the app development you have surely stumbled upon on one or other time upon the concepts of "native app", "Web App" and "Hybrid App". But what is the difference between the various App types exactly?

This term refers to apps that only run on a specific operating system. They have the advantage that they can exploit the capabilities of the device. So special iOS apps are being developed for Apple devices, for example, what the programming Objective-C and SWIFT are used. Tablets and smartphones from Google, however, need Android applications that are programmed with Java and Microsoft Windows Phone running apps that are developed based on C ++ and C #. Native Apps are fast and efficient. In addition, you are able to use all hardware features of the devices. The only downside: for each platform must be a separate native app developed, the more operating systems are supported, the higher the costs are.

Web-App is basically a normal web site, which is based on HTML. It can be accessed via the URL from a browser and then offers a very specific functionality. For example, a typical Web-App is the Pinboards App. A web-based application, has not only the meaning, information, but also serves to interact. For the development of web apps are HTML5 and CSS3- and often also Java Script knowledge necessary. In addition, you will need the appropriate frameworks such as jQuery. Compared to Native Apps, Web apps can be developed more quickly and are run on any current Browser. Therefore the cost for a Web-App is less than for a native app. But it is only for the implementation of simple ideas.

As the name suggests, the hybrid App is a connection from the native and the Web-App. In fact, it is called a Web page within the app. The content and the management of the user originate from the Web app, the app is based on the hybrid. Here too, there are technologies like HTML5, CSS3 and JavaScript. The native elements are developed either by hand or incorporated by certain tools. They also allow access to the hardware of the mobile device. The big advantage of such an application is that the platform-independent development is not a problem, but the benefits of the native app are not lost..